Evening Bats are one of Ohio's 13 bat species that can be found throughut Cincinnati.

The Evening Bat is a bat that's commonly found here in Ohio. These are tree bats that are not afraid to roost in homes and attics. As such we at Xceptional Wildlife Removal encounter these bats frequently. These bats are everywhere in Ohio but are not as frequent near Lake Erie. The Evening Bat is listed as a species of special concern. This means that this species is heavily susceptible to humane involvement and habitat changes. As such these bats are in dwindling numbers in Ohio from human involvement.

The Evening Bat has striking similarities to the Big Brown Bat but this bat is much smaller ar 3-4 inches long. They have short dark brown hair that gets lighter near their stomach. These bats also have a pungent smell which can help distinguish them from other bats like it.

These bats primarily feast on insects such as beetles, winged ants, and flies. These bats also partition resources with other bat species such as the Eastern Red Bat and the Seminole bat. This means that they prioritize different prey at different times so that the amount of prey does not get extinguished.

Mating occurs in the fall and winter when they have delayed fertilization where they will get impregnated in the spring. Female bats will have maternity colonies away from the males, where they will give birth and rear young. Like most bats, they generally give birth to twins, although single and triplets are possible.

These bats prefer forests and open areas such as rivers and wetlands. Evening Bats are tree-dwelling bats and are rarely seen in caves. They can be found in attics and the hollows of trees. 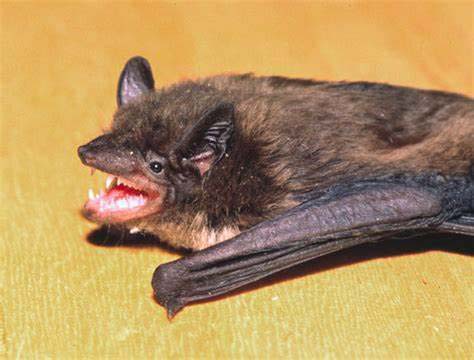