Gray Bats are one of Ohio's 13 bat species that can be found throughut Cincinnati.

Gray Bats are year-round cave-dwelling bats but may occupy different caves in winter and summer. Gray Bats was listed on the federal endangered species list back in April 1976, but Ohio has no classification for them in the state. The Gray bat can be found in the southern areas of the state but is becoming increasingly rare. If you have discovered bats in your Cincinnati attic chances are it would be a little brown or big brown bat colony, and not Gray Bats. Our Bat experts of Xceptional Wildlife Removal can assess bat a colony to determine the type and size of the bat colony and recommend the best humane bat removal method.

Like their name, Gray bats have short, soft, grayish-brown fur that may become a more russet color during the summer months. Gray bats are distinguishable from others because of their uniform color. They are medium size bats but the largest of the Myotis species. They are 3-4" in length and can weigh up to a quarter to 3/8 ounces with a wing span of 11-13 inches. Gray bats' wings attach differently from other Myotis bat species, their wings attach to their ankles rather than their toes. This is a distinguishable feature from other Myotis species.

Gray bats feed primarily on winged insects, particularly mayflies. Commonly feeding over bodies of water such as lakes and river roost in caves not more than 2 1/2 miles from bodies of water where they forage for food.

Gray Bats mate from September to October when they return to their winter roost. Most Gray bats are hibernating in caves by November. Once mating has concluded hibernating occurs shortly after. The females will store the sperm over winter and become pregnant in early spring after they emerge from hibernation. Once the females emerge they will begin to form large maternal colonies. These colonies can be from several hundred up to 1,000 bats large. A single pup will be born in late May or early June and will begin to fly 20 to 25 days after birth.

Gray Bats primarily occupy caves due to them having particular roosting requirements, but they can sometimes be seen under bridges, on dams, and in mines. 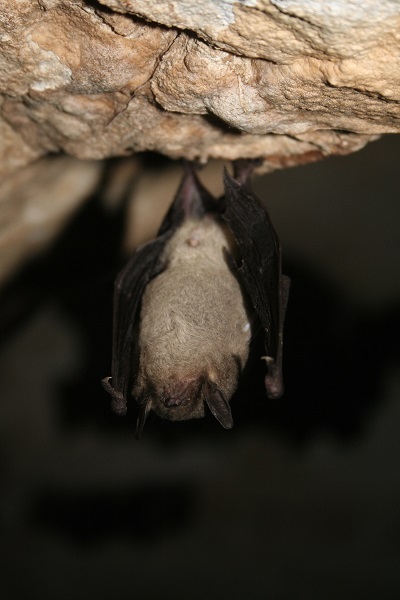