Little Brown Bats are one of Ohio's 13 bat species that can be found throughout Cincinnati.

The Little Brown Bat is a small mammal with a body length of 3" to 3 1/2" and weighs approximately 1/8 to 1/2 ounce. The wingspan of little brown bats range from 6 to 8" and they can live 20-30 years. Bats are the only mammal that engages in active flight. As their name suggests, they are glossy brown with a light buff color.

Little Brown Bats are found from Labrador West to Central Alaska and south to the Appalachians of Virginia and Arkansas, they are located in most states except Florida, Texas, and Southern California. They are abundantly found throughout New Hampshire. Here in Cincinnati, they are the most common bat seen.

Little brown bats are insectivorous, eating a variety of insects including some agricultural pests. They can eat 50% of their body weight each evening. During gestation and lactation, they will eat even more. These nocturnal mammals use echolocation to navigate and locate prey.

Little brown bats feed primarily over wetlands and other still water where insects are abundant. They use our Virginia Rivers, streams, and trails as travel corridors to navigate across the landscape. Bats will occasionally swoop down close to mammals to indulge in the insects that swarm around them.

Sexual maturity is reached in 6 to 9 months for females and 1 year for males. The breeding period is from September to October but the female stores the sperm for fertilization in the spring. The young are born from mid-June to early July. In Fairfax, the little brown bats generally have one offspring per year and occasionally two. The young become self-supporting within one month. 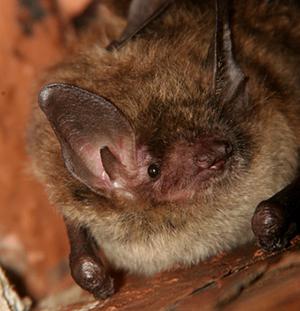