Northern Long-eared Bats are one of Ohio's 13 bat species that can be found throughut Cincinnati.

The Northern Long-eared Bat is listed as endangered by the state of Ohio and by the US Government. The main threat to this species is a disease called white-nose syndrome. This disease attacks bats when they hibernate and will make them active during hibernation, making them lose their fat reserves and killing them. Other factors are human involvement, most notably people going into their caves during hibernation and disturbing them like how white-nose syndrome does. This bat can appear in the attics of homes during the summer months as temporary roosting areas. Our exclusion program will make sure that they do not come back without harming or disturbing this species as it is protected by the state of Ohio. The Northern Long-eared bat is migratory, and can be found throughout Ohio, but retreats into the mountains in caves during the late fall and early spring. During the summer these bats can be found in small crevices in groups. We tend to find them in attic vents or the soffits of homes.

Compared to other bats of the Myotis genus (Mouse Eared Bats) the Northern Long-eared bat has much larger pointed ears, which is where it gets its name. This bat is usually around 3.4 inches in size, with a 1-inch long tail. This makes this bat have a larger wingspan and tail than other bats in the Myotis genus. This bat has light brown colored wings with dark shoulders.

Northern Long-eared Bats can be found everywhere in Ohio. These bats' range extends down to central Alabama and all the way northwest to northern Canada. However, here in the States they rarely go further west than Nebraska, avoiding the Rocky Mountains.

Instead of hunting insects in the air like other bats, the Northern Long-eared bat partakes in gleaning. Which is where they take food from leaves, twigs, and the ground. They primarily feast on moths, flies, beetles, and spiders.

The mating habits of the Northern Long-eared bat have not been extensively studied in Ohio. However, it is assumed that mating takes place in the fall and has delayed fertilization. Leads to birth in the spring after hibernation. These bats tend to mate outside of the caves, on tree barks, barns, and other buildings.

The Northern Long-eared bat can be found in the hollows of trees, but they can also roost on man-made objects such as barns, attics, and sheds. During the winter, these bats move to caves to hibernate. Caves or mine shafts with no temperature changes, in small crevices. 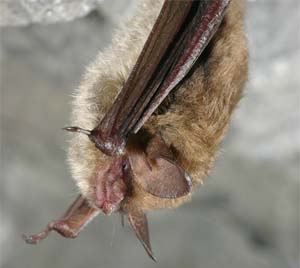