Rafinesque's Big-eared Bats are one of Ohio's 13 bat species that can be found throughout Cincinnati.

Due to loss of habitat from development over the native swamps here in Ohio, the Rafinesque's Big-eared Bat is under the Extirpated Conservation status or in other words, extinct here in Ohio. Although Ohio's Department of Natural Resources has them listed as endangered. If they are here in Ohio they are in very small numbers.

These bats like to roost in the hollows of trees and old buildings. However, those closer to the Appalachians can also be found in caves and mines. However, unlike the other cave-dwelling bats in Ohio, their population is not affected by white-nose syndrome, as most prefer to be in the trees rather than in caves.

The Rafinesque's Big-eared Bat is the largest found here in Ohio with a size of 5-6 inches long. These bats have black bands, tan bands, and dark brown bands, all of which are tipped with white color. These white tips are where the name Hoary comes from which is an older word for grayish white.

Rafinesque's Big-eared Bats could be found in southwestern Ohio. Historically they used to be found as far north as Toledo, but their numbers have dwindled to the point that they can only be found near Cincinnati if at all. In the United States, they are found as far south as Miami, and as far west as Houston.

Mating season starts in the fall through the winter when they are migrating to their winter sites and roosts. After which, females will form maternity colonies. They will give birth in early summer, these bats do not have long gestation periods, but rather has delayed fertilization where they will mat in the fall and will get pregnant in late winter and early spring.

Here in Ohio, Rafinesque's Big-eared Bats prefer swampy woodlands that could be found in the northwest, however due to habitat loss in that region they can be found in the forested areas to the south. During the winter they retreat into caves and mineshafts for hibernation. 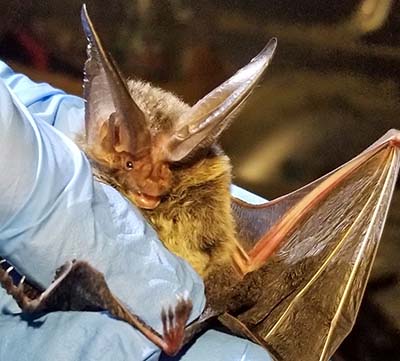