Silver Haired Bats are one of Ohio's 13 bat species that can be found throughout Cincinnati.

The Silver-Haired bat is listed as a species of special concern here in the state of Ohio and does not have conservation status. This means that this species is particularly vulnerable to human involvement and natural disasters, and they do not have a proper survey for how many Silver Haired Bats are in Ohio. One major issue for them is wind turbines, which are one of the leading causes of death for these bats. These bats are solitary and you can find them roosting alone in trees or sometimes in rock crevices or other narrow cavities near streams or lakes. These bats are migratory, and you will see them here in Ohio when they are in the middle of migrating in the spring and fall. Although some stragglers may appear here in Ohio during the summer.

At first glance, these bats do not look silver at all with their dark brown fur color. However, the silver color comes from the tips of their hairs, giving the bat an almost greyish brown color. No other bat here in Ohio has this fur color, so if you find a silver or grey-colored bat then what you are seeing is a Silver-haired Bat. These bats are usually between 3-4 inches long and have short and rounded ears. Do not handle this bat as this is one of the few species of bat in Ohio that can carry rabies. Please call a professional to remove this bat.

Silver Haired Bats can be found in every state in the United States except for Hawaii. They can be found as far north as Anchorage Alaska and as far south as central Mexico.

The Silver-haired Bats are opportunistic feeders and tend to eat what they can get a hold of. But when given a choice, they prefer soft-shelled insects such as moths. They have been known to eat spiders and harvestmen as well.

Mating for these bats starts in late August when they are on their way to the southern states and Mexico to roost for the winter. When they give birth in late June, the Silver-haired bat tends to produce twins. They can fly after one month of being born.

Here in Ohio, Silver Haired bats tend to live in the hollows of trees near the rivers. It is uncommon to find them in human-made structures but it does happen. 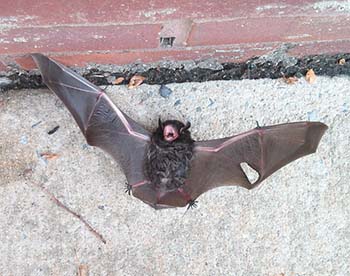