Tricolored Bats are one of Ohio's 13 bat species that can be found throughut Cincinnati.

Tricolored bats are endangered here in Ohio due to White-nose syndrome. This disease is decimating the bat populations in the eastern United States, making bats expend much-needed energy during hibernation, and causing them to starve during the winter. Before the disease the Tricolored Bat was one of the most common bats present here in Ohio. This bat can appear in the attics of homes during the summer months as temporary roosting areas. Our exclusion program will make sure that they do not come back without harming or disturbing this species as it is protected by the state of Ohio. The Tricolored bat is migratory and can be found throughout Ohio, and will retreat to the caves of western Ohio during the late fall to hibernate. These bats will become active again in late Spring. This bat and the Silvered Haired Bat is a known carrier of rabies and contributes to 70% of rabies cases. When handling, or if you have a bat in your home, especially the tricolored bat it is highly recommended to get a rabies shot as symptoms will appear years later, and when they do it is 100% fatal.

The Tricolored Bat is one of the smallest bats here in Ohio, measuring around 3 inches long and weighing a light 0.1-0.3 ounces. Just as its name states this bat has 3 distinct colors a dark base, a white center, and a reddish brown tip. Its forearm and elbow are a pink almost reddish color which is heavily contrasted with its dark wings.

Tricolored Bats can be found everywhere in the eastern United States. They can be found as far north as Canada and as far south as Central America, however, they are not found west of Texas.

Tricolored Bats are insectivores and eat primarily flying and aquatic insects. Most notably, mosquitos, beetles, ants, moths, and cicadas. These bats start hunting early into the evening and are usually the first species of bat to start hunting. These bats use echolocation to hunt.

The Tricolored Bat will mate in large groups in the fall. The Tricolored Bat has delayed fertilization and instead of giving birth a few months later, they will give birth after their hibernation in June or July. After this, they will nurse their young called pups, under tree barks in small colonies only consisting of females and pups. This is because cooler temperatures will slow the development of the pups, and somewhere warmer than their cave is needed.

Here in Ohio, Tricolored bats tend to live in wide open areas with large trees. Most notably, forest edges and riverbanks. They can be found in many other places as well such as suburbs and urban areas. During the winter they will retreat to nearby caves to hibernate. 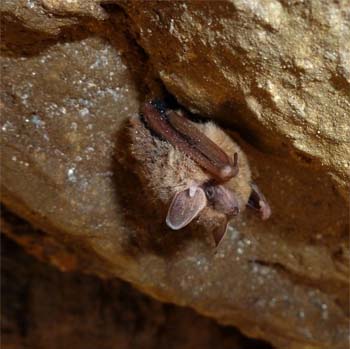